Crowdfunding, when a group of people collectively network and pool their money to support projects or ideas by an organization or other people, is not a new concept. Crowdfunding today requires a mix of social media, marketing, and internet savvy in order to persuade the public to donate to one project over the many thousands vying for attention and money. To date crowdfunding has raised over $1.5 billion dollars, and counting. It is this large capital gain, the ability to communicate directly with the public, and test new ideas that has helped crowdfunding to get the attention of major brands. Crowdfunding allows for another source brands to connect with consumers and further push their marketing messages further.

For a smaller companies and individuals crowdfunding is a more simplistic, than that of a large corporation. For example, in May of this year when actor, director, and writer Zach Braff sought to make a sequel to his 2004 movie Garden State, to avoid lower funding from movie studios and have more creative control, Braff turned to a Kickstarter campaign for help. Depending on the level of contribution fans could receive a wide range of benefits, everything from autographed memorabilia to attending the premiere. Through the use of social media, Braff and fellow producers worked to get the attention of fans and as a result netted $3.1 million dollars to make their movie. 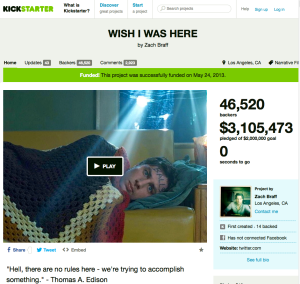 For an individual, like Braff crowdfunding is a way in which they can gather a lot of support under a lending or reward/pre-purchase model of crowdfunding. However, this type of model where a consumer gets marketed to for a purchase of a good or service, can be problematic for a larger corporation, brand or company. Instead, big brands such as Coca-Cola, Honda, and Domino’s are using another model for crowdfunding- donation. For large brands this method of crowdfunding allows for the ability to show consumers that a brand stands behind a cause, helps to give back, and they could also possibly get participation from even noncustomer. One example of this is Honda’s work with Indiegogo, with their “Save the Drive-In” campaign which is helping to raise money to support the shrinking number of drive-in movie theaters that can’t afford to upgrade to digital equipment. 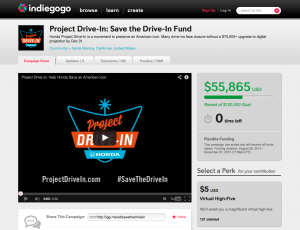 Brands that do decide to participate in crowdfunding have several unique opportunities for their business through this medium. Crowdfunding can be used as a research tool to track who is donating to your cause, and if they are a not current customer, help to provide information on how to bring them on as one. Taken a step further, crowdfunding can also be used as a way to allow consumers to interact with experimental products or services, and gauge feedback. Crowdfunding is also a great way to positively push forth your brand’s message – when backing a cause, or innovation; it allows consumers to approach your brand in a different way than they would with traditional marketing techniques. Finally, crowd funding provides a marketing channel that allows for brands to reward their backers. Since many crowd funding projects offer some sort of reward for backing a project, it gives the chance to brands to have the ability to not only give back to their communities but also to those helping improve them.

Crowdfunding is a great way to reach out to current and prospective consumers on a different level. It is important that when a brand or company looks to use crowdfunding as a marketing tool, that research is done on regulations, how it will be supported internally, and that it is promoted through other marketing channels correctly. Crowdfunding must be treated as any other channel and that means using other types of media such as social media to promote it. Throwing up your brand on Kickstarter and expecting it to sell itself will not work; it takes time and a solid marketing plan for it to truly be a success.

One thought on “Marketing and Crowdfunding”